Q and A with
Genderless Clothing Designer
Vincent Li

Melbourne-based Vincent Li is known for his eponymous and genderless clothing label.  Vincent is no stranger to Cocktail Revolution as we’ve spotted the designer numerous times in the streets of Melbourne and have featured him in our weekly street style gallery.  This time we  catch him on the phone while he’s  travelling in Japan to ask him about his latest collection, collaborations and his personal style.

Your latest genderless clothing collection, MIRRIGANG, is a collaboration with Ngarigo queer visual and performance artist Peter Waples-Crowe. How did you two come to work together?

Last year in January, Creative Victoria were looking for a project which would be exhibited at Hong Kong Design Week. They thought about how they’re going to define Australian fashion. For the collaboration, they felt that Peter and I have some similarities. So they matched us two together. 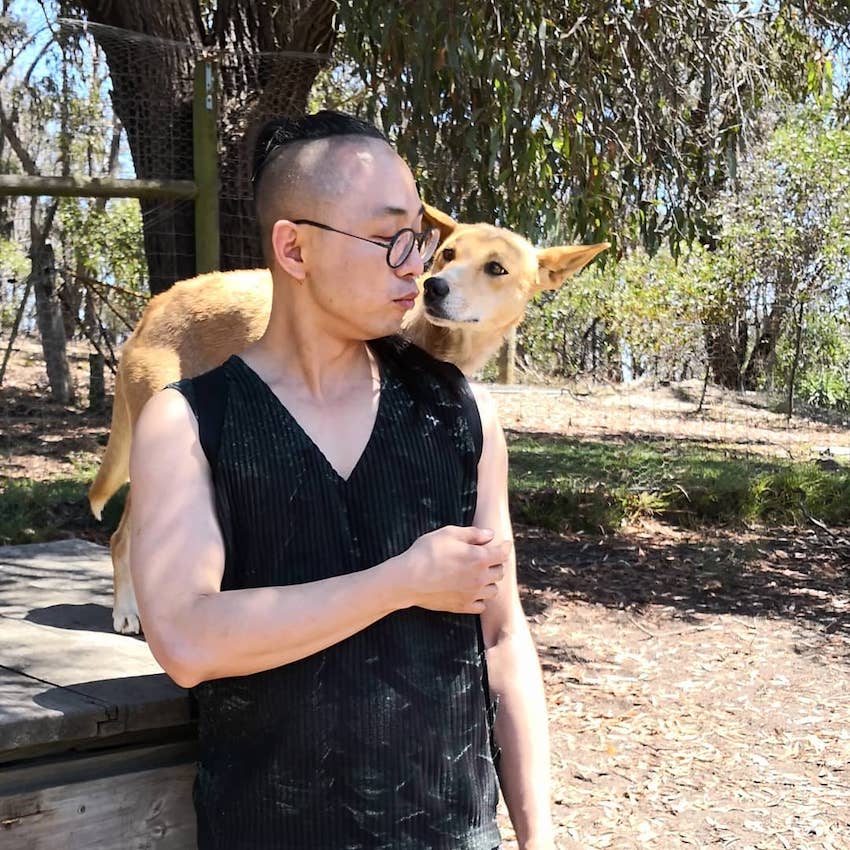 Peter was the first Indigenous man I ever got to become close to.  I  learnt about Indigenous culture, which I had very limited knowledge about before. Peter was very kind and generous to me. I did a lot of research on his work to understand his beliefs and why he uses certain techniques and symbols in his artwork.

Tell us more about the collaboration and the collection.

MIRRIGANG means wild dog. Peter is passionate about dingoes. They’re his artistic symbol. He feels very connected with them. As Peter has said, “it’s seen as a native animal but it isn’t afforded the same protective status as other pretty native animals, like koalas.” 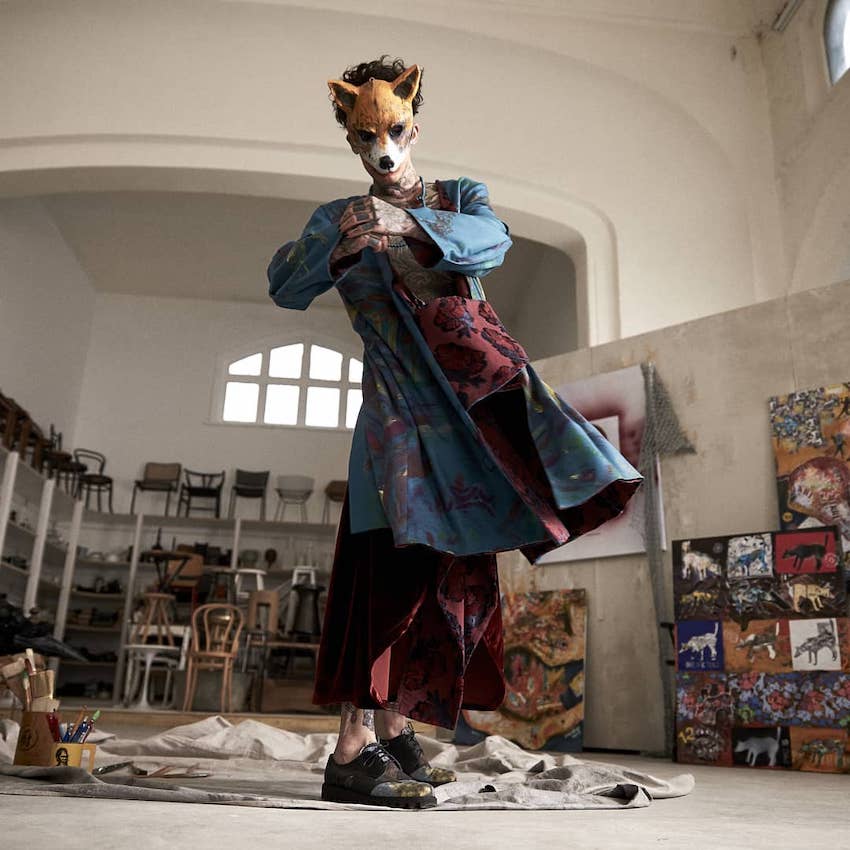 That’s the reason we both thought we should choose the dingo as the centre of the collaboration. We really wanted to portray the feeling of being inside and outside. Lots of the outerwear is reversible and detachable so you can pull it apart according to your taste. Symmetrical, asymmetrical, plain colours or clashing prints. It has all kinds of flexibility. All the shapes and details are in the shape of a dingo’s ear which is versatile across different body types and is genderless. For men, it could be a coat. For women, it could be a dress.

The images from MIRRIGANG are full of movement and life. How has your background in dance influenced your work?

Everything comes from emotions. When you dance, you’re telling a story and you’re conveying a message or feeling. And that’s translated into how I design. There’s an element of fantasy, poetry and theatrics to my clothes. They always have movement. I don’t like them to be static. 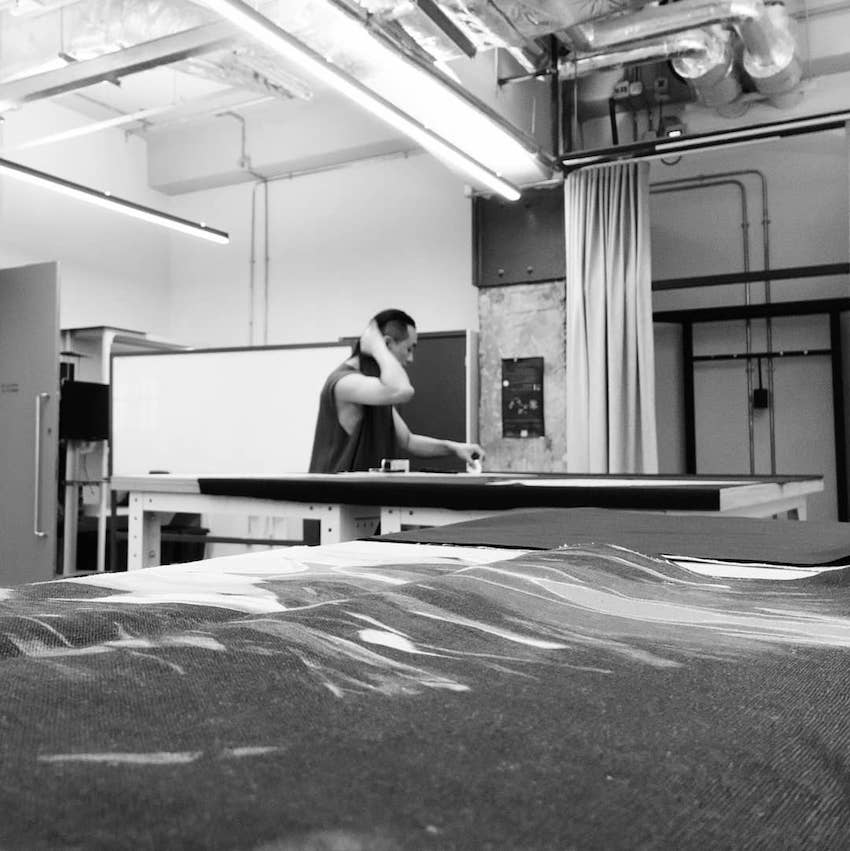 You’re known as a genderless menswear designer. Why is this distinction important to you?

I’ve always wanted to make menswear. I think menswear rules haven’t changed much for almost a hundred years. There’s a focus on textiles and details, but not much in the silhouettes. I wanted to challenge this and think outside the box. It’s not conventional menswear. Because of this approach, it appeals to men and women. I wouldn’t call it androgynous because many androgynous labels are quite feminine. As you can see with mine, there’s still a certain masculinity in the clothes.

Can you tell us more about your upcoming collaboration with the Hong Kong Ballet Company? 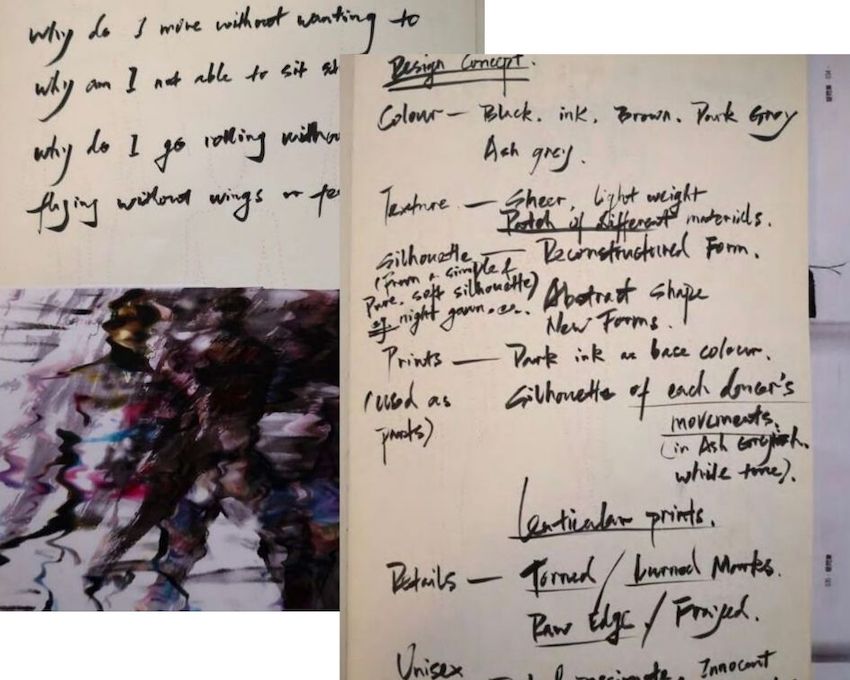 It’s going to be very dark, with a lot of black, dark charcoal and dark navy. They have three males and two female dancers and they all dance differently. Each garment has to suit their personalities, so there will be five different outfits. I want to create different prints based on their own dance movements. These patterns will be against a dark background, almost illuminating the printed semi-transparent chiffon or sateen. The choreographer Helen Lai, also wants the costumes to look like people walking on the street, just normal clothes. I’m going to look at deconstructed normal wear on the body. I think it’ll make it more interesting but still minimal, so it doesn’t distract from their bodies.

How has your identity as a Chinese man living in Australia influenced your designs of genderless clothing? 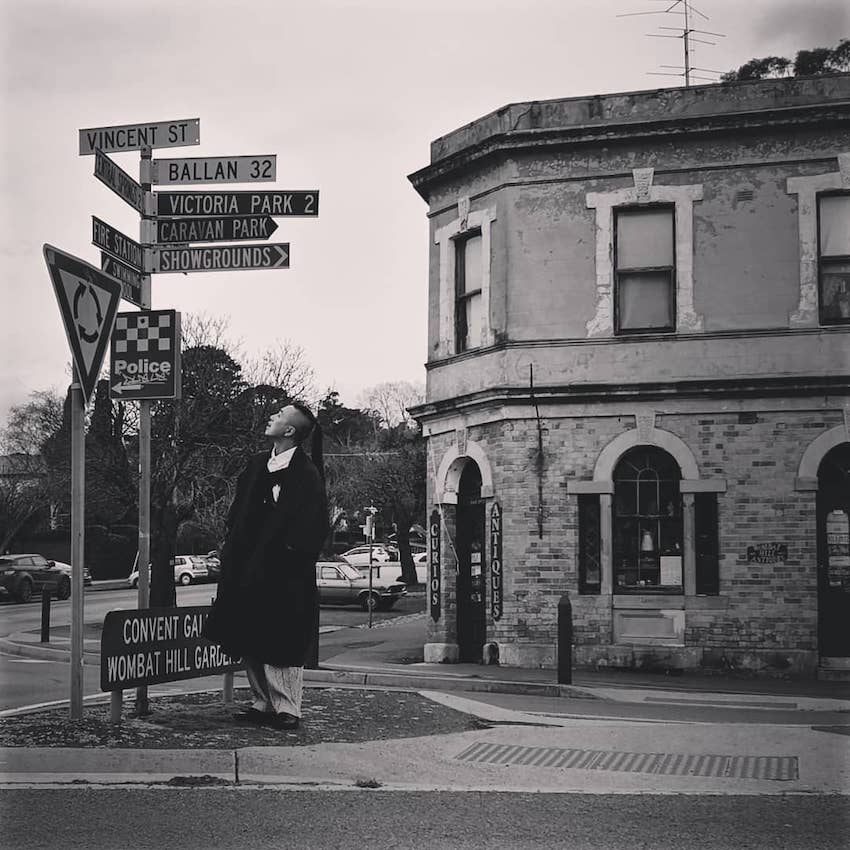 I think I only realised that I’m very Chinese when I moved to Melbourne. I really didn’t notice my Chinese identity when I lived in Shanghai. But when I moved to Melbourne, I kind of felt different. People will ask you questions like, “where do you come from?” So that made me actually pay attention. I started doing research to find out about my own culture and heritage. That really helped me understand my whole worldview and I discovered something that was really valuable – our culture is something we inherit, keep and need to keep practising. So that comes into my design philosophy. My designs reflect Eastern philosophy, but in a subtle and abstract way. I’m not going to put a dragon in your face!

How would you describe Vincent Li ‘s  personal style? 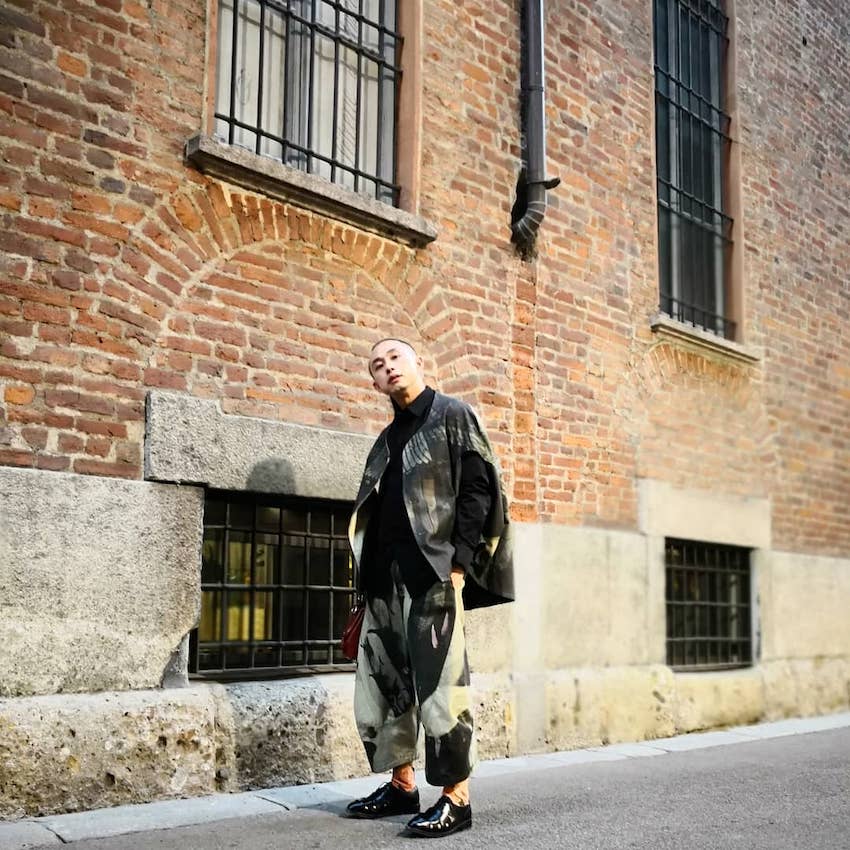 My personal style is… comfortable! I like things that surprise me. I don’t define it as a particular style because it will change. I wear clothes that I appreciate the ideas behind. Certain silhouettes and cuts suit you, but that style can also change. Sometimes you want something more fitted, sometimes you want something looser. It can be the textile, the cut, the detail or the finish I’m attracted to. If it’s made in a smart way, I find it so beautiful. It could be something new that I’ve never seen before or it may have really an old technique that’s done beautifully that I would like to wear.

Check out our Year of the Dog Shoot , or to see more about Vincent, tap here.